ResolVe has been a very successful research and development project to explore the commercial use of post-consumer polystyrene waste as a raw material to produce high-quality plastics. The project addressed the technical feasibility and the layout of an entire recycling concept including contribution by recycling companies. ResolVe has been set up as a three-year project (July 2017 - July 2020) and was funded by the Federal Ministry of Education and Research (BMBF) with a total volume of almost 1 million Euro under the programme Research for Sustainability (FONA) as a part of the initiative “Plastic in the environment”. INEOS Styrolution collaborated with RWTH Aachen (ANTS – Department of anthropogenic material cycles – former I.A.R., RWTH Aachen University), and IKV, Institute of Plastics Processing, RWTH Aachen University), Neue Materialien Bayreuth GmbH and INEOS Manufacturing GmbH.

Climate change, environmental pollution, population growth and resource dependency trigger the ecological and economic necessity to transition from a linear to a circular economy. Polymers generally contribute to resource savings during their whole life cycle: their production is energy-efficient, they are lightweight yet durable, and their properties can be optimised to fit the special requirements of their applications. On the other hand, particularly their durability may also pose a problem, if the recycling of the polymers is not an integral part of the overall concept.

Plastics can be recycled in various ways. Depending on the requirements, it can also be considered to make use of mechanical recycling, by which industrial or post-consumer waste is physically processed back into pellets, without changing the basic chemical structure of the material. Click here to read our press release on mechanically recycled polystyrene, developed in close collaboration with TOMRA.

The revival of concepts for advanced chemical recycling is a huge step forward, because it avoids incineration to a great extent, especially for plastic waste that cannot be mechanically recycled (anymore). Plastic waste is becoming a valuable raw material, and the bound carbon can be kept in the loop. CO2 emissions thus are minimised, and, in the long run, losses might be compensated with utilisation of biomass.

The ResolVe project has been dedicated to the advanced recycling of polystyrene. Polystyrene is a widely used polymer (see PlasticsEurope), that is used as a transparent, impact-modified (so-called HIPS) or foamed material in many applications. It can be found especially in packaging, in housings of household or electronic articles, but also as insulating material in the construction sector.

Similar to all other thermoplastic polymers such as polyethylene, polypropylene or polyethylene terephthalate, polystyrene can be mechanically recycled very well. For this purpose, in modern sorting facilities, polystyrene packaging material is collected as separate fractions (e.g. Germany: DKR 331 & 340). Click here to read our press release on mechanically recycled polystyrene, developed in close collaboration with TOMRA.

However, the demanding applications of polystyrene provide special challenges for mechanical recycling. In packaging with food or drinking water contact, there are high requirements on the purity of recyclates. In further applications, polystyrene is valued for its outstanding colourability and gloss.

Advanced recycling provides the answer to these challenges, with polystyrene demonstrating its advantages: At high temperatures, it breaks down in a pyrolytic process into its smallest building blocks – styrene monomer. The monomers may be purified with established procedures and reprocessed to high-quality styrenic polymers with properties similar to virgin materials.

Waste streams that do not allow for mechanical recycling (anymore) may be used in a total new approach, because impurities in the polymer are reliably separated in the pyrolysis and purification process. A core element of the ResolVe project was to investigate in different waste sources, as well as different waste compositions and the resulting changes in styrene yields.

The depolymerisation process of polystyrene that has been utilised in the project ResolVe only required a polystyrene-enriched feedstock. This can be obtained by cost- and resource-efficient sorting technologies and still resulted in recyclates with the quality of virgin materials.

In the ResolVe project, a large, lab-scale steel batch reactor has been used to study the decomposition process and to evaluate different feedstock sources. To investigate the behaviour in small pilot scale, a reconfigured twin-screw extruder has been used in a continuous operation mode. Extruders are standard tools to process and granulate polymers, and they are found in nearly every polymer processing company. In contrast to established procedures, the extruder was optimised to generate a maximum output of gaseous decomposition products.

One method for advanced recycling of plastic waste is thermally induced depolymerisation. For polystyrene, this works better than for many other polymers. In this particular form of pyrolysis, the polymer is broken down into monomers and other low molecular chemical building blocks. The monomers are then used to recreate polymers that have identical properties to polymers from conventional feedstock. The so-called "downcycling”, that often takes place in mechanical recycling, is therefore avoided. 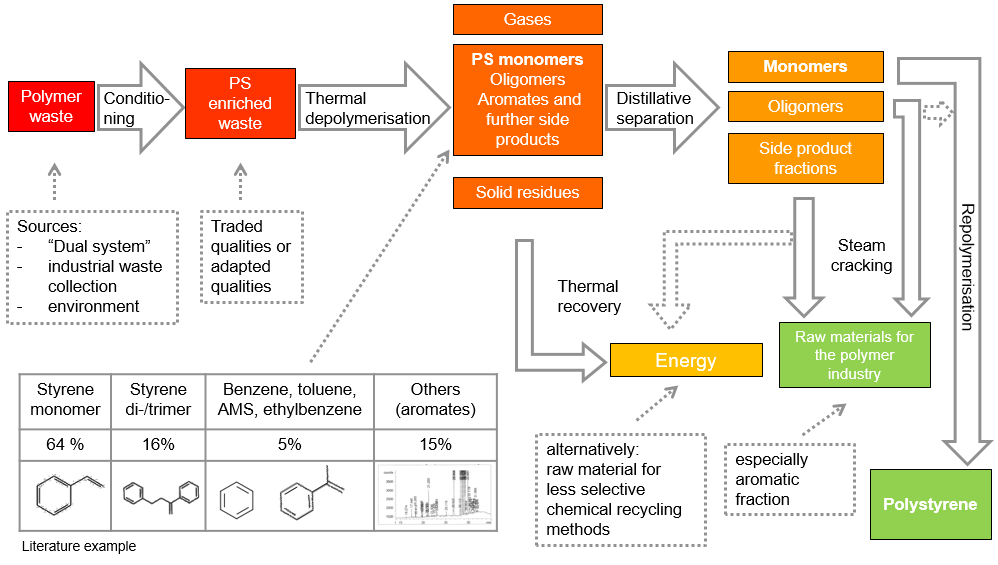 The flow diagram shows how the technology works: PS enriched polymer waste is thermally depolymerised. Styrene is formed as the primary product, aside from oligomers and other pyrolysis products that are condensed and collected as styrene oil. Pigments, fillers or adherent dirt from the waste input form a solid residue. The styrene is then purified via distillation or other separating technologies to the extent that an utilisation in the polymer production is enabled. Further by-products may be isolated and used as raw materials as well. Only residues that cannot be used in further processes are thermally recovered and contribute to the generation of the necessary process energy.

Within the ResolVe project, the effects of various impurities and the changes in important process parameters were investigated. It was shown that depolymerisation helps to reduce waste streams and to exploit valuable resources. In addition, styrene generated by this process even allows to meet common food contact standards. A life cycle assessment showed that the process requires less energy and emits less CO2 than conventional polystyrene production. Overall, it can thus be concluded that the new extruder process for recycling PS waste streams and producing styrene monomers is technically feasible and makes sense from an ecological point of view. Finally, the project team demonstrated that polystyrene is made for advanced recycling.